In the paper by Hoad et al. (2015), two different methods to measure gastric content volume (GCV) were compared, by MRI and by gamma scintigraphy. A regression line was computed which is the best prediction of GCV(MRI) given GCV(Scintigraphy). The slope was close to 1, which was interpreted that both methods were equivalent within the error limits. 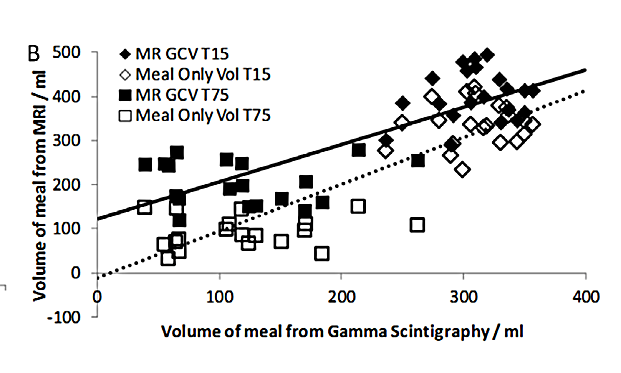 In the diagrams below, artificial data were generated so that the values plotted against each other are equal on average. This simulates the case when both methods are comparable in accuracy. One should expect a slope close to 1 for the regression line. 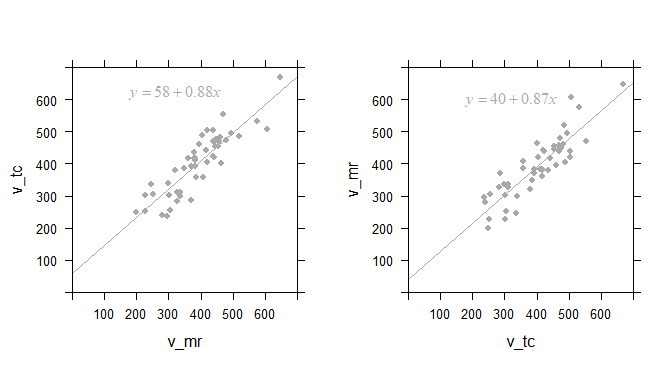 The computed regression curve is shown in the inset. For the plot of v_tc against v_mr, the slope is 0.88. We had expected a value of 1, so is the smaller slope estimate a quirk of randomness?

Somewhat: Correlation is symmetrical: it does not matter if we plot v_mr against v_tc, or the inverse. The correlation coeffient in both cases is 0.88. Note: it is purely accidental that the numeric values of the regression and the correlation are the same!

No: because the correlation coefficient does not require that both measures are equal, only that they are linearly related. If we multiply v_mr by 10 and add 50, the correlation with v_tc will remain the same, even if the two methods produce totally different results.

Lin’s concordance index comes to the rescue. It is symmetrical, and can be interpreted similar to the well known correlation index r, with the additional requirement: we expect that the value are the same, not only related by a linear equation.

And how to illustrate this?

I have made fun of medical researcher’s tendency to reduce statistics to p-values, Bland-Altman-plots and AUC. Nevertheless, here is a case where a so-called Bland-Altman plot can be used to illustrate the relation between the data without singling out one of the two methods as the error-free gold-standard. 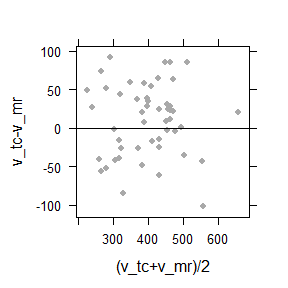 Bland-Altman plot of the difference between against the average of two methods. The cloud is symmetrically distributed around the horizontal axis, and there is no trend. This indicates that both methods are approximately equivalent.

The principal component line can be regarded as a regression line where both axes are on a par. It is therefore better suited to show how two different methods for gastric volume measurements are related. 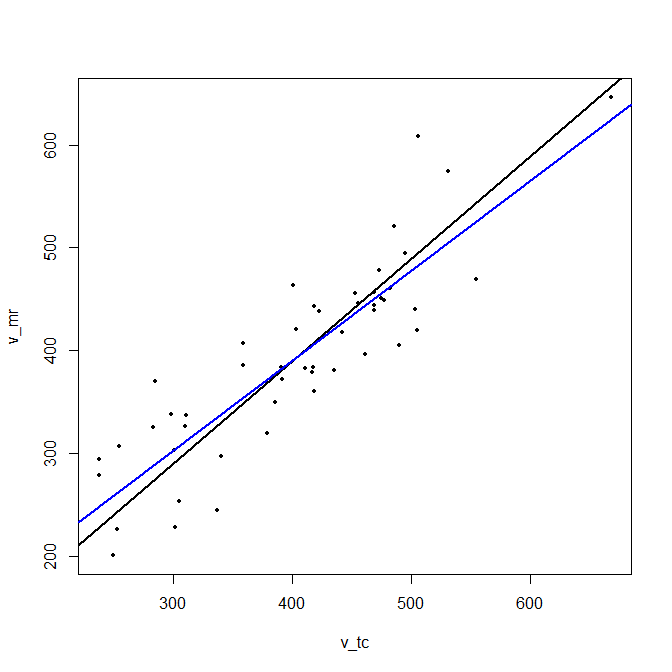